Beyond the Building: Old Trafford 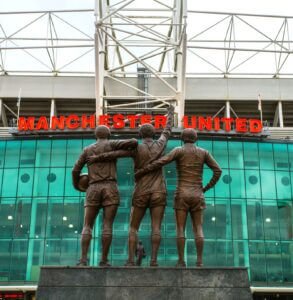 The facts: Otherwise known as the Theatre of Dreams it was designed by Scottish architect Archibald Leitch (who was also responsible for Craven Cottage and White Hart Lane). Initial plans were to house 100,000 people but rising costs meant Leitch had to had to scale the capacity down to 80,000. Nonetheless when it opened on February 19, 1910 it was still the biggest stadium in England prior to the construction of the original Wembley Stadium. In February 1910 Old Trafford hosted its first game (to Liverpool of all teams) and has been home to Manchester United ever since, with the exception of the period 1941 to 1949 when the club shared Maine Road with local rivals Manchester City. Why? Because during the Second World War, the stadium was used as a depot by the military, and its proximity to Trafford Park Industrial Estate meant it was the target of several bombing raids, ultimately destroying the structure in 1941.

It was rebuilt by 1949 and since then has undergone various expansions and improvements including the addition of floodlights in 1957 and the installation of a cantilever roof in 1965.

Any interesting details: Old Trafford was the home of the first private boxes at a British football ground, a suggestion made by Matt Busby after watching baseball in the United States.

Controversy: Depends if you’re a red or a blue. Famously the stadium isn’t technically in Manchester, but in Salford. Future expansion of the stadium isn’t without controversy either, with the redevelopment of the South Stand requiring the demolition of 50 houses at the back of Old Trafford.

Do say: “The Sir Alex Ferguson Stand is three tiers tall, and can hold about 26,000 spectators –  the most of the four stands.”

Don’t say: “Where are the Shankly Gates, pal?”