Today is International Women’s Day and in celebration of this, we profile Dame Catherine Fiona Woolf DBE, DstJ, DL. 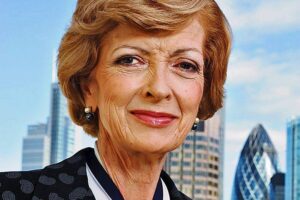 Dame Fiona Woolf is a British corporate lawyer; she served as Lord Mayor of London 2013-2014, only the second woman in 800 years to do so. Born in Edinburgh, she qualified as a solicitor in 1973, worked at CMS and became the firm’s first female partner in 1981.

Her career as an energy and infrastructure lawyer has taken her all over the world; she has advised more than 25 governments – and the World Bank – on reforms to create the necessary certainty to attract lending and investment and to introduce new markets and regulatory regimes in a single country or a whole region.

She was awarded a CBE in 2002 for her contribution to the UK knowledge economy, and was Lord Mayor of London for the year 2013/14 (it bears repeating that she was only the second woman in a role which began in 1189). One of her key mayoral campaigning themes was the furtherance of women in executive careers, and the correction of the traditional imbalance between the sexes in senior City positions.

A past President of the Law Society of England and Wales, she is also a former Member of the Competition Commission, a former Non-Executive Director of Affinity Water, a Trustee of Raleigh International and a Senior Adviser with London Economics International LLP.

She was awarded a DBE in the 2015 New Year Honours for services to the Legal Profession, Diversity and the City of London.

In 2013, she was the Times’ Lawyer of the Week, and in answer to the question

What would your advice be to anyone wanting a career in law?

She replied: “You will always be using knowledge and skills apart from law — for me, it is engineering and economics — and clients’ needs are changing all the time. That’s why it is fun.”